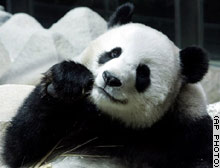 Lin Hui, a panda on loan from China, chews on
some bamboo at the Chian Mai zoo in Thailand

CHIANG MAI, Thailand (AP) -- After years of painstaking research, scientists say they have unleashed a baby boom among one of the world's most beloved but endangered animals, China's giant panda.

It is one of many techniques tried over the decades to get captive pandas -- notoriously poor breeders -- to do it, and do it right. The efforts to understand and simulate conditions for mating and raising cubs have paid off in China, the panda's native habitat. Now comes the next test: getting the magic to work outside China.

The big day will come in January, when Prasertsak Buntragulpoontawee hopes to bring off a successful mating between male Chuang Chuang and partner Lin Hui in this northern Thailand city.

The audio-visual approach "is the same idea as chimpanzees seeing people smoke and then copying it," says the Thai researcher.

Zhang, director of the Chengdu Research Base of Giant Panda Breeding, attributes this year's record high births not to any single breakthrough but to an accumulation of research on panda biology, nutrition and genetics while "trying to imitate nature better."

The result, by his count: In the first 10 months of this year 31 cubs were born in captivity in China, of which 28 survived. That's up from 12 births in 2005 and just nine in 2000. Of this year's births, 14 came through natural breeding, while artificial insemination or a combination of the two produced the rest.

Among the roughly 20 pandas outside China, no cubs were born this year through mating, Zhang told a conference here of 140 panda experts. But at Zoo Atlanta on Sept. 8, artificially inseminated sperm from panda Yang Yang yielded an offspring for mate Lun Lun.

JoGayle Howard, an animal reproduction specialist at the Smithsonian Institution in Washington, D.C., said the goal of raising the captive breeding population to 300 from the current 220 is rapidly being reached. This would prevent inbreeding, widen the genetic pool and enable more captive animals to re-enter the wild, where the panda population is estimated at 1,600 to 3,000.

Howard said the biggest challenges in panda breeding are an extremely high rate of incompatibility and the very narrow window of opportunity -- females are ready to mate for as few as 48 hours a year.

"At first people thought that you just put two animals together and they would figure it out. But it didn't turn out that way," she said. "Now we know how to take care of the panda better. We've really made progress. But we're still learning a lot of even basic things."

Captive animals used to lack proper socialization; with no companions around, when the male and female met for breeding "they just freaked out and fought," Howard said. Now enclosures are bigger and contain more animals.

There's also a push to keep cubs with their mothers longer, for up to two years, to give them more natural sex education.

Scientists have also learned more about sex and aggression. In the wild, Howard explains, females in heat will climb a tree while suitors below fight for her. In captivity, with no male rivals around, pandas often take out their aggression on the female.

Adds Zhang: "In the wild they have their own choices when mating. But when we breed them in captivity it's like taking two human beings and forcing them to mate."

But despite the advances, there are still only about 15 captive male adults which breed naturally. Second best is artificial insemination, and after years of study frozen semen can now be shipped around the world and applied according to a comprehensive genetic database.

Prasertsak is prepared to use both methods as he readies his couple for mating at Chiang Mai Zoo, which has rented the animals from China for research and tourism purposes.

The pressure is on. Last year Lin Hui showed promising symptoms but they turned out to be a pseudo-pregnancy, not unusual among pandas.

Will the blue movies help?

Opinions differ on the visuals, but Zhang and Prasertsak agree on the sound track.

"It's the sounds of breeding that stimulate them," Zhang said. "Pandas are just like human beings. They understand everything."