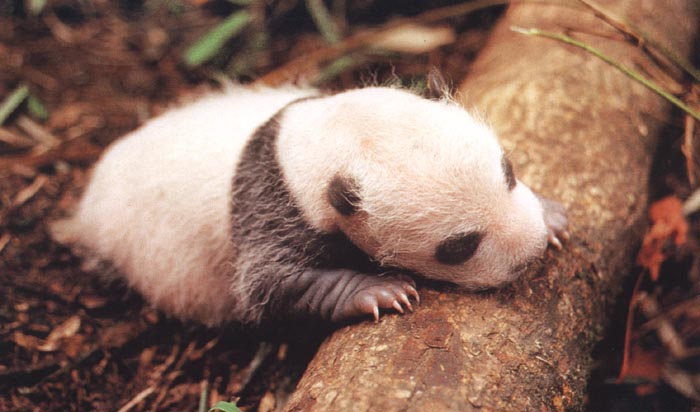 
Female giant pandas do not normally mature until they are 5 to 7 years of age. Copulation normally takes place in a manner similar to members of the canine (dog) family.

Mating begins in late-March and continues on into May. Similar to other bear species, the female stays in heat for only a short time, normally two to seven days. Unlike any other bear, males will often roar to announce their presence to receptive females. Females may mate with several males during the breeding season.

Through a remarkable process referred to as delayed implantation, the fertilized ovum divides a few times and then floats free within the uterus for a few months with its development arrested. Sometime around June or July, the embryo will attach itself to the uterine wall and after a gestation period of eight weeks (August or September), the giant panda female will enter a rock cavity or hollow tree to deliver one or two cubs.

At birth, the cubs are blind and very tiny. They weigh from 90 to 130 grams (3 to 4 1/2 ounces). This is about the size of a chipmunk. The newborn cubs are covered with a fine white fur but will have acquired the typical giant panda fur colouration within a month of their birth.

The mother will use the maternity den for a month to a month and a half. Cradling the newborn cub in her forepaws, the mother will hold the cub so that it is able to suckle similar to a human mother nursing her child. The female regularly leaves the den for two to three hours to forage on nearby bamboo. Giant panda cubs are eating bamboo by the time they are 6 months old and are fully weaned by the time they are 9 months of age. At one year of age, the cubs normally weigh about 35 kilograms (75 pounds).