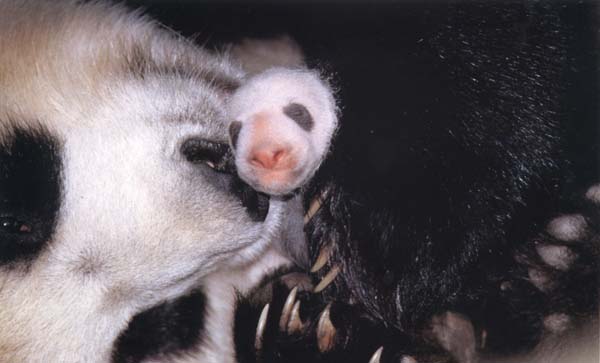 
Giant pandas have a massive head, heavy body, short tail, rounded ears and plantigrade feet (i.e., both heel and toe make contact with the ground when walking in a manner similar to humans).

A sedentary bear who usually stays in a selected feeding area eating large amounts of bamboo, giant pandas generally move in a slow, determined manner. When startled, they will move at a slow trot to escape danger. Giant pandas, with their short claws, are capable of climbing trees very easily.

The head of the giant panda is very large and has developed large molars which are specifically designed to crush fibrous plant material. It has powerful muscles which extend from the top of its head to the jaws giving it the capacity to crush tough stalks.

Giant pandas have forepaws which are extremely flexible. Evolution has given them a enlarged wrist bone (the radial sesamoid) that works in the manner of an opposable thumb. This highly functional adaptation allows the giant panda to manipulate their primary food source, bamboo stems and leaves, with dexterity and precision. The hind feet of the giant panda lack the heel pad found in the other seven bear species.

While members of the order Carnivora , giant pandas have evolved almost exclusively into vegetarians with accompanying changes in their dental structure and, also, to a lesser degree, their digestive tract. Their short intestine is still not sufficiently developed to remove all of the available nutrients from the fibrous bamboo on which they feed.

The basic fur colour of the giant panda is white with black eye patches, ears, legs, feet, chest, and shoulders. Within its natural environment ( the deep forest and, at upper elevations, snow and rock) , its mottled colouring provides camouflage. There is also speculation that its striking colour pattern may be a clear message to other pandas to stay away as the giant panda is an extremely solitary animal.

The fur of the giant panda is thick and coarse. It consists of a coarse outer layer and a very dense, wooly-like underfur. To the touch, the fur feels oily. This oily protective coating helps protects giant pandas from the cool and damp climate in which the bear lives.