Giant pandas: Born to be wild

A record number of giant pandas have been reared in captivity this year, thanks to new fertility techniques - and some sex education. Clifford Coonan reports

The "one-child policy" is not having much of an impact among the cuddly black and white creatures who are China's national symbol. At panda breeding facilities across this vast country, giant pandas, normally the beasts least likely to breed by themselves, are having a baby boom. This year there has been a record number of giant panda births in captivity as Chinese scientists use better artificial insemination techniques, and other natural methods such as "sex education".

The Wolong Giant Panda Protection and Research Center is home to many tiny creatures, where blue-clad panda specialists tend to their many needs. The birth of twin giant pandas in mid-September at Wolong, which is in the south-western Chinese province of Sichuan, brought the number of this endangered species born in captivity so far this year to a record 27. Most of the bears, 26 of whom survived, were born in China, but some were born abroad, including one in a zoo in Atlanta.

That's quite an array of new mums. You You is eight years old and gave birth to a 158.5g female cub and a 160g male cub at the Wolong center last month. Five days before You You's delivery, five-year-old Ya Ya gave birth to two cubs in the nearby city of Chongqing, but sadly the mother crushed one cub in her sleep, a regular occurrence when twins are born. The other one was sent to Wolong.

This year, Guoguo gave birth for the second time. The healthy male emerged bottom-first and clocked in at 181g to bring the number of cubs at the Wolong centre to 17. Guoguo was in rut in April and mated with two pandas, Qingqing and Lulu, and gave birth after a 97-day pregnancy, much shorter than many panda pregnancies.

Experts used to think there were 1,590 giant pandas living in the wild in China, but a joint study by Chinese and British scientists in June showed there could be as many as 3,000 after a survey using a new method to profile DNA from giant panda faeces. Another 180 live in China's five major breeding facilities, but they are still one of the world's most endangered species.

Wolong is leading the drive to keep pandas from dying out. A lot of the success stems from a better understanding of how pandas live and mate - they seem to have all but overcome the breeding difficulties which pandas famously suffer from.

"As a result of our research over time, the artificial insemination rate and baby survival rate have been dramatically enhanced," says Prof Zhang Hemin, director of the China Conservation and Research Centre at Wolong.

"I'm optimistic about the panda's future," says Zhang. "The panda population here is growing very fast. We're confident the panda will exist forever. The fact that there are 180 pandas in captivity now is largely due to our success in resolving the problems with mating. We hope to have 300 before too long.

"Each year we want to put 20 or 30 back into the wild to try and improve the DNA. If we want to have a self- sustaining panda population, we need a bigger pool of individuals, because we need a relatively high genetic diversity," says Zhang.

On paper, pandas look like their own worst enemies; it sometimes seems they are genetically programmed to become extinct. They have an extremely slow reproductive rate, and spend most of the year on their own, except during a three-month mating season which begins in March each year.

Male pandas are no Casanovas, suffering from a chronic lack of sex drive - more than 60 per cent of males in captivity show no sexual desire at all, and only a tenth will mate naturally. And the girl pandas like to play hard-to-get. The female is fertile for just a few days each year, during which time she emits a distinctive sound and her sexual organs turn red, then white. Pregnancy lasts around 160 days. Pandas generally give birth to just one cub, which weighs about as much as an apple. When two cubs are born, the mother will often abandon or crush the cub in its sleep as she is not equipped to care for two.

The centre has been giving them sex-education classes as they enter adulthood - showing them videos of other pandas mating in an attempt to arouse their instincts. The programme has been reasonably successful. Some researchers say the pandas were glued to the screen and there was a small increase in the number of births.

Then there is the diet issue - what they do eat they find difficult to digest as they have a very inefficient digestive system. Pandas are officially categorised as carnivores, but 99 per cent of their diet is not meat. But, vegetarians or not, pandas put away vast amounts of food - up to 25kg a day each - and bamboo makes up around 95 per cent of their diet. They spend nearly 12 hours a day eating bamboo shoots, leaves and stems. In bamboo, of which there are 300 varieties in China, the panda has chosen a troublesome staple. Bamboo will flower and then die off about every 20 to 40 years, at which point the pandas have to move on to fresh pastures. Not an easy task, as nature gives way in the rush to industrialise China, and pandas can starve while trying to locate a new bamboo area.

Despite the panda's reproductive and digestive shortfalls, human beings are the main factor behind the depletion of the giant panda population. China needs natural resources to fuel its booming economic growth, which has led to logging and clearing of land in bamboo-growing areas.

Hunting and poaching were traditional problems for the panda, though they are now forbidden by law and the ban is strictly enforced. The Chinese government has set up many nature reserves in south-western China to protect the beasts, and one of the reasons for the recent growth in the population is that the state has turned large parts of the panda's habitat into reserves where logging, hunting and farming are forbidden. There are also plans to expand programmes of "bamboo corridors", strips of undisturbed land through which pandas can travel from mountain to mountain. And it could be that this is paying off, although conservationists say the jury is still out on the panda's future.

The facility at Wolong was set up in 1983, when 10 pandas were rescued from near-death and researchers began to look for ways to improve pandas' ability to breed.

On the drive from Sichuan's capital, Chengdu, out to Wolong, a bone-shaking three-hour drive along a narrow road which looks down hundreds of metres to the river below, you can see some of the massive environmental changes that are destroying the panda's natural habitat.

The route takes you past huge cement factories and chemical plants. The sky begins to clear up as Wolong approaches and by the time you've reached the park it is like being in a different country. Hawks circle in the sky, golden monkeys jump up and down as the car passes, and a clear river splashes over shining rocks.

Then you spot a giant panda, a flash of black and white in the green foliage, then it is gone again. But at least it no longer looks as though the panda is gone for good.

The panda is a large mammal which can be 1.5 to two metres tall and weigh up to 160kg.

Most of China's wild pandas roam the isolated hills of Sichuan, Gansu and Shaanxi provinces, chomping bamboo and staying as far away as they can from human beings, their only predator.

Although they are the world's best-protected endangered species, their natural habitat is under threat from logging and road-building.

Panda cubs cry when they're hungry.

They migrate higher in the summer, lower in the winter. They generally move around on their own and are solitary creatures.

Female pandas come into heat for just three days every year, and 60 per cent of males in captivity are impotent.

Today there are nearly 3,000 pandas in the wild, with around 180 in captivity.

Giant pandas are bears, though there is much discussion about whether they are actually bears, raccoons, or if they are in fact a separate species.

They share a lot of bear characteristics, but do not hibernate in winter. As they don't eat much meat, despite being carnivores, they do not build up the excess fat needed to hibernate. Unlike many other bears, pandas do not walk on their hind legs, and only climb trees when threatened. 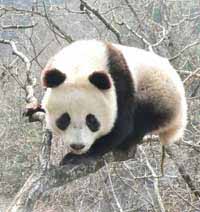